The benefits of equine-assisted therapy aren’t just experienced during weekly riding sessions! Dylan’s mom quickly discovered that anytime her four year old is on the Giant Steps grounds he is calmer and more focused.

After one of his weekly riding sessions, she expressed some concern about an upcoming kindergarten interview with Dylan, who lives with autism, and their dream school. A previous interview had not gone well, so there was a lot of anxiety going into this next one. Jen, Giants Steps’ Head Instructor, suggested that Dylan come by the barn the morning before his interview to see if the calm he experienced there could create some momentum for the rest of the day.

The day of the interview, they arrived at the barn ready for work and spent time filling water buckets and mucking stalls. Dylan was just as calm and focused as he was during his weekly riding sessions and he seemed to feel proud of looking after the horses. Dylan’s mom later reported back that it had worked and that he had done extremely well during his interview. His calm even lasted the rest of the day.

It’s only been a couple of weeks since that day but on a weekend that Dylan was having a tougher time regulating, his mom sent a quick email to ask about volunteering. Once she got the OK, she was in the car and headed to the barn. It was another morning of filling water buckets and mucking stalls and it was just what Dylan needed. He was able to have a physical activity in a low stimulating environment all while giving back to the horses. We’re so proud and grateful to be able to offer our services! 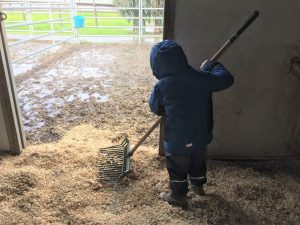 At the barn Giant Steps Rider Success Story No Comments